Anna Wintour, Kelly Cutrone and Why Bitches Will Never Go Out of Style 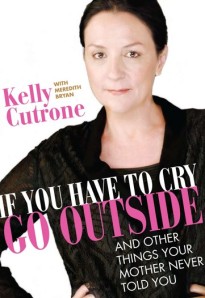 
Yesterday marked the debut of Kelly Cutrone’s new Bravo show, Kell on Earth and today marks the launch of her new book, “If You Have To Cry, Go Outside…And Other Things Your Mother Never Told You.” Her character, made famous on MTV’s The City, is a melange of qualities made for TV stardom: she’s a certified bitch, reminiscent of Meryl Streep in The Devil Wears Prada and yet, she can be a kind and nurturing mentor as seen in her interactions with Whitney Port.


With Cutrone as the star, the show promises to be full of bitchy, power struggles between cold, dehumanized bosses and hurried-looking assistants struggling with depression, insanity and bad hair days. Peppered with celeb sightings and New York Fashion Week shows, it’s sure to be another addictive Bravo hit.


But it highlights a deeper issue I’ve faced several times in my career.


If pushed to the limit, I can certainly be a bitch. Exhibit A: If you mess with my siblings, I turn into a tiger with an insatiable desire to beat you into submission (not physically, but you know what I mean). But in general, I’m a friendly, warm, even giggly person.


I like to have fun and get along with people—and my work ethic is very much internally-driven (and kind of psychotic, I would stay at the office until the wee hours night after night) so bitching at me won’t make me work any more diligently or effectively. It will only make me resent you. And me being bitchy, when unprovoked, just doesn’t come off real (imagine Beyonce trying to curse, something to that effect).


My boss at The Magazine blamed my aversion to ‘bitchiness’ as a sign of my naiveté. A legend in the the industry, she had worked in Fashion for years at every major publication in the business. She’d styled every celeb from the latest ‘It’ Girl on the cover of Elle to the old Hollywood royalty that grace the pages of Vogue. She had every photographer worth his weight in film on speed dial. And according to her, she didn’t get there by being nice.


Our theories clashed one day when I was fulfilling a last minute request to get robes for a celebrity to be featured on the cover. I had already called in robes and gotten them cleaned, but this celebrity only wore Tommy Hilfiger, a delightful little detail the production team discovered and shared with me the day before the shoot.


So like any trained journalist, I put the harassing skills I learned at my town newspaper to use. I started calling and emailing incessantly to get the robe to our office by 5pm to be sent to LA, which means the messenger would have to pick it up on a rush by atleast 4pm. The Tommy PR guy, who I adore fondly, was doing everything he could to get the particular robe to my office, including calling stores to borrow it (since it wasn’t in the showroom). But when I gave my boss an update, she didn’t think he was moving fast enough.


She told me to send him an email demanding that we get the Tommy Hilfiger robe right away or all hell (a la Kell on Earth) would break lose. Ugh…okay. I channeled my inner bitch and sent him a message that relayed the urgency and inadvertently, my desperation. I copied my boss, pressed send and proceeded to get back to panicking.


Ten seconds later, literally, my boss calls me in her office. The production manager is there, too. She tells me to sit down and close the door. She folds her arms. Her eyes are glaring and the air in the room is suddenly thick. My mind is racing. Did I remember to pack extra garment bags? Pick up the Ralph Lauren? Give her layout instructions to the Art Director? Order flowers for the Gucci PR Coordinator that just had a baby? I’m near panic attack when she finally begins her rant.


For ten minutes, my boss, who curses out at the minimum one person per day, chastises me about my use of the phrases like “please,” “I would appreciate,” and “as soon as humanly possible.” (According to her, the appropriate word was “NOW!”) That was not the way to get ahead in this business and thank God she was there to teach me that now. The production manager, who had become a pseudo-celebrity working in the industry since the 1960’s, agreed wholeheartedly. I couldn’t have been more confused.


Fast-forward to another job I did writing for a TV show. On Day One, I have the quintessential eager beaver attitude of a new worker, introducing myself to everyone, engaging in small talk and connecting over shared loves of Karl Lagerfeld, Law and Order: SVU and Cold Stone ice cream. And then, I meet my boss. She seems totally normal at first. Long legs, beautiful, silky hair, a cheery voice and a razor-sharp mouth. She likes my writing style and energy and it seems like we are definitely going to hit it off. And then she pulls me to the side and tells me, “Don’t take it personal if I say or do bitchy things to you. I’m not evil, just serious about my work.”


Well, fortunately for her, I’ve dealt with a string of bitches in my fashion career and totally know not to take it personal (or rather, respond professionally and firmly and then cry privately in the bathroom). So it wasn’t her command that bothered me. It was the tone. She said it as casually as her request to always respond rapidly to the PR people. As if handling her bitchiness in the right manner was simply a job requirement.


So I started thinking about my new boss, my old boss and Tommy Hilfiger-gate…about Anna Wintour, Nina Garcia and Kelly Cutrone….and about how there are few, successful women in this industry who aren’t widely regarded as bitches…and I wondered, do we need to be bitches to be successful?


Fashionistas, Beauty Girls and working women in general, what do you think? Fellas, do you have to be tough to be taken seriously? Discuss.

Posted in A Day in the Life, Kelly Cutrone