Posted on September 12, 2009 | Leave a comment
Hey Glamazons!
And the madness continues. Today, I went to the Charlotte Ronson Spring 2010 show and was introduced to the fabulous clothes I will be rocking all next season (umm…if I get a raise).
The designs were downtown, rocker chick meets ballerina. Charlotte gave her younger fan base the trendy, downtown style they’ve come to expect from her: 80’s shoulder pads, motorcycle jackets (with puff shoulders…to die for!), harem shorts, jumpsuits, leather bras (got to get my hands on one of those!), acid wash and stonewash denim and plenty of studs, zippers and spikes.
But the fresh spin is that she juxtaposed that downtown look with feminine, ballerina-inspired details and a touch of grown-up sophistication. For example, we saw double-breasted pantsuits paired with leather studded stilettos. Boyfriend shirts and blazers and vests spiced up with funky zipper details. The ballerina twist showed up in soft hues of dove gray, white and blush and flowy fabrics like chiffon. And of course, the hairstyles were variations of the classic ballerina chignon adorned with a trendy braided headband. Here are my loves: 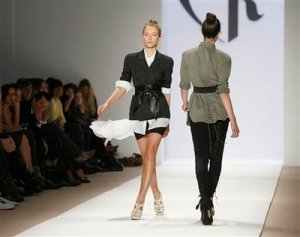 Blazers with leather waisted belts made for grown-up silhouettes. 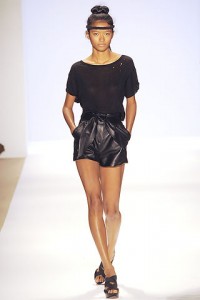 Charlotte Ronson walks out to applause at the close of the show
It was a tough-luxe fashionista’s paradise. The opposite of Utopia, however, was the celebrity chaos that ensued before the show started. For some awful reason, the PR people couldn’t get the seating right. People who legitmately had a seating assignment (not the “fakes” who bumrush the tents) were being regulated to the back or standing because the PR people had mistakenly filled their seats. One skinny PR girl randomly gave me a seat in the center in the 3rd row when I was supposed to be in row 6 (I’m not complaining) and dished: “I’ve been working on seating for half an hour and I was just supposed to be handling invites.” Messy, messy.
Luckily, during the chaos, I got to meet Angela and Vanessa Simmons (Uncle Russ was in the building as well), spot Nicky Hilton and chat with Keri Hilson, who “appropriately” wore her “favorite Charlotte Ronson dress.” In a one-shoulder printed minidress with one matching glove and platforms, she was more than appropriate – she could have easily been one of the models. She made me wish I wore my Charlotte Ronson…for JCPenney’s dress. =)

Keri Hilson posed for me in her black/metallic mini with one-leather-sleeve and glove. Can we say fierce? 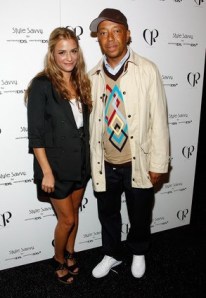 Power families: the Simmons and the Ronsons
And can I just say, I love that the Ronson shows and events are a family affair. While sister Charlotte Ronson presented her fab designs, brother Mark Ronson sat in the audience, sister Annabelle modeled on the runway and sister Samantha Ronson shut it down as a DJ. Family fun, I love it!
Kisses,
Coutura