Like we warned you weeks ago, Kim Kardashian’s designs hit the runway for the first time as a part of the Style 360 Fashion Week series. A young crowd, including Rob Kardashian’s ex, Adrienne Bailon, watched as a parade of chic, ubertrendy looks came down the catwalk.

The styles, which ranged from a pink one shoulder dress to a black wrap jumpsuit, were a bit safe and dated—but keep in mind, these designs are for a mall store as opposed to a high-end fashion brand. The look stayed true to Bebe’s signature style (form-fitting, sexy, young, trendy) while appearing as if each piece was designed specifically for Kim Kardashian’s body. Curves were exaggerated with petal draping and cinched waists, and the silhouettes were all body-skimming and flattering.

The color palette was monochromatic with blacks and grays, interspersed with vibrant pops of pink. All the trends of last season were incorporated into the collection: sheer, cut-outs, one shoulder, statement necklaces, jumpsuits, white blazers, blah, blah, blah. The shoes—some platform sandals, some booties, all open-toe—troubled me.

Kim wore a hooded sweatshirt dress under a leather corset with matching black gloves. In my opinion, it just didn’t seem to fit her style (it was more bad-girl than L.A. socialite chic) but her body still looked amazing (is that Quick Trim?! wow!). Oh and did we mention J-Wow from Jersey Shore was there (sideeye)? Check out the looks below and give your verdict: 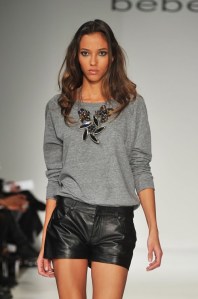 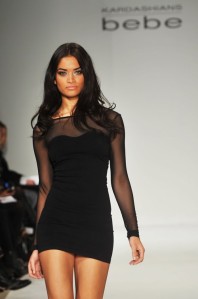 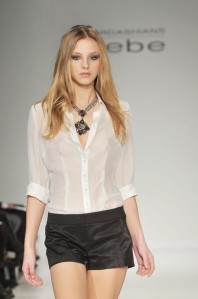 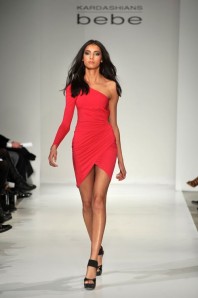 Glam or a Sham?

In a short time, Kim Kardashian has managed to make her way from an X-rated home video to TV screens across the country—and she has successfully infiltrated every corner of the industry along the way.

If you walk past a Macy’s fragrance counter, there’s Kim in a 50’s style lingerie pushing her new perfume. Turn to the E! channel and there’s Kim and Co. making their family squabbles public for our weekly viewing pleasure. Catch a football game on Sunday and there’s Ms. Kardashian’s megawatt smile on camera whenever Reggie Bush scores a touchdown. Buy some gum at the newsstand, look up and smack in front of your face is Kim on the cover of OK! Magazine (every week!) dishing about her romance, her life as an Auntie, her new hairspray, anything!

It only makes sense that her next territorial conquest is the Fashion industry, starting with its most celebrated week. Yep, that week. Word has it that the Kim & Co. are trying their hand at designing with a collection for retailer, Bebe, which will make its debut during New York Fashion Week. So in addition to playing celebrity in the front row of shows like Tracy Reese and Badgley Mischka and being the spokesperson for Shoe Dazzle, Kim Kardashian will be hosting the launch of the Bebe store in Soho and showing as part of the Style 360 Fashion Week series.

And I’m NOT mad (I’m sure you’re either surprised or outraged by that fact. Hear me out.) It’s not like she’s designing for Emanuel Ungaro with little to no experience (hi Lindsay Lohan!). A privileged, wealthy socialite living in LA who spends her days shopping on Rodeo Drive and nights showing it off on the red carpet knows a little something about mall retail. Now, add to that someone who lives in outfits that show off her Armenian curves, and who’s better than Kim to design the club staple that is a spandex Bebe dress?

Not that I want Fashion Week to be overrun with porn-turned-reality stars or even mall retailers (History lesson: every year a show like this slips in somewhere between Oscar de la Renta and Michael Kors. Study She by Sheree), but I’m not angry at the collaboration. Kim, or better yet, Kris, knows what’s she’s doing. Now, will the collection sell with Kim & Co.’s endorsement and designs? That remains to be seen.

Ugh. Update: My amazing roomie and I found it comical that on E’s Fashion Police Special last night, Khloe Kardashian asked why MTV’s Jersey Shore castmember, Snooki, was at the Grammy’s. Umm, same reason you are on TV right now, Khloe. Paris Hilton has arguably started a regrettable trend where non-celebrities are the new celebrity.

That said, I have news that would make a designer vomit their Starbucks coffee. Our beloved Page Six has disclosed that the MTV’s The Jersey Shore castmates, yes Situation and Snooki, may not only attend but…I’m cringing…MODEL in Fashion Week shows. Now, I’m crying. I’m from Jersey (and proud. It’s an amazing place that Jersey Shore does not fully represent in the same way “Real World Brooklyn” didn’t capture all of BK and the “Harlem Heights” cast didn’t speak for all of Harlem, but I digress). There were times during my visits to Seaside Heights (everyone goes, not just the guidos) while scarfing down chicken fingers and fries at the boardwalk that I didn’t want to even SIT next to a greasy-haired, fist-pumping, tattooed guido for fear of their horrible fashion sense being contagious. 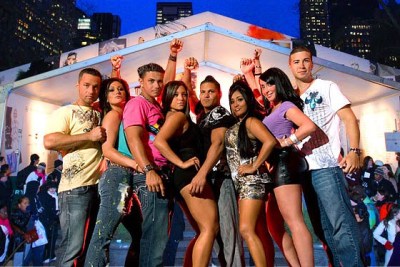 Now, years of slaving in the Fashion Closet, at photo shoots and juggling the demands of running Fashion websites have earned me the privilege of sitting behind one of them at a fashion week show…when my days consist of interviewing designers, visiting showrooms, reviewing collections and diligently searching for the next ‘It’ designer…and theirs consist of “Gym. Tan. Laundry?”

Unless the show involves a makeover that includes washing the grease out of their hair (can you imagine what the sink will look like after?) and the pounds of make-up off their faces, I don’t see the point. Clearly, the designers are inviting the Jersey Shore castmembers, and the Kardashians for that matter, for the inevitable press they’ll receive as a result (that ironically I’m facilitating by writing about this now…yes, I understand the irony).  Is press worth associating Jersey Shore-esque reality stars with your brand? Quite frankly, any designer that thinks Snooki has fashion sense worth endorsing is not a designer I want to support.

And not only have they infiltrated modeling and appearing at shows, they’re designers too, as is the case with Kim Kardashian. Does Kim deserve a chance to design and show at NYFW with only shopping experience under her belt? Bebe shoppers, what do you think about this collaboration? Is it a good business move for the company? And would any of you wear Kim Kardashian’s designs?